Is Tony Gill another Mary Anning?

The very nature of the terrain surrounding Lyme Regis and it’s neighbour Charmouth can be likened to a double edged sword. The outcrops of Blue Lias, a sedimentary rock from the Jurassic period, is extremely unstable, especially where it meets the erosive force of the sea and bad weather. Landslips are a regular occurrence, erosion is continuous. This causes headaches for landowners and coastal defense departments. With this constant erosion, geologists and fossil hunters are regularly rewarded with new and exciting finds.

The first lady to take a scientific interest was Mary Anning, born in Lyme Regis in 1799. At the tender age of 10 years, she and her brother Joseph found the first recorded ichthyosaur fossil, her 18ft specimen became world famous.

Mr. Tony Gill has recently found a massive 40ft specimen, the biggest ever found. It will take many months of painstaking work to finally reveal the 180 million year old monster hidden in its rocky grave.

It is through the dedicated work of enthusiasts world wide that a greater understanding of the development of our planet is revealed.

Mary Anning learned how to collect ichthyosaur fossils from her father. She prepared and sold them to institutions and collectors.

Tony Gill has hunted for fossils most of his life. He prepares and sales them at his shop, Charmouth Fossils.

The drawing of a specimen example of plesiosaur fossils by Mary Anning, found by her in 1823 in the blue Lias at Lyme Regis. This was a completely new species known to the world. 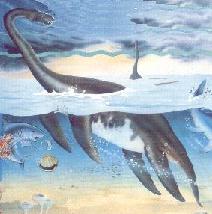 An artists’ impression of a plesiosaur swimming in the Jurassic seas when the dinosaur roamed.

An artists’ impression of an ichthyosaur swimming in the Jurassic seas.

Tony Gill found his ichthyosaur (photograph at top of this page) during the Easter of 2000, after several day of heavy rain caused a slip on the coastline at Charmouth. He plans to show the preparation of the fossil at his shop, as he does it.