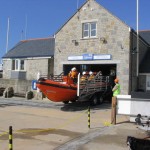 Only two years after the foundation of the Royal National Institution for the Preservation of Life from Shipwreck in 1824, Lyme Regis was fully recognised as a town that needed a lifeboat.

This need had been originally highlighted in the November of 1824 when, during a tremendous storm, the lives of the crew of the barque “Unity” were saved by local men at Black Ven east of the town. The actions of three of the rescuers, Captain C Bennett, William Porter and John Freeman gained recognition in the awarding of a gold medal and two silver medals respectively. These were some of the first RNLI medals to be awarded.

Early in 1825, a Coastguard Captain named Richard Spencer altered a local boat by fitting of airtight compartments and cork fendering so that it could be used as a “proper” lifeboat. The organisation that we now know of as the RNLI (since 1854) was pleased with Spencer’s experiments and in 1826 brought the saving of life at sea under its auspices.

From 1826 to 1852 the station was served by two locally converted vessels, but no records exist to their names. It was the events of Boxing Day 1852 that stimulated the need for a purpose built lifeboat in the town when four of the five lifeboatmen perished on service to the barque “Heroine” carrying emigrates bound for Australia.

The following years saw two 27ft ‘Peake Plan’ lifeboats at the town and in 1866 the first named lifeboat, the “William Woodcock” (O.N.214), was placed on station.

The 33ft “William Woodcock” carried out 7 services and was replaced in 1891 by the “Susan Ashley” (O.N.322) and then by the “Thomas Masterman Hardy” (O.N.650) in 1915. In all, the five named sailing and rowing lifeboats carried out 32 call-outs before the station was closed in 1932, as motorised lifeboats from Exmouth and Weymouth were believed to be able to cover the area.

In 1937, and with only local boats once again acting as lifeboats, the Royal Air Force Marine Craft Unit came to the town and operated their fast patrol and safety launches from the site of what is now the Marine Centre west of the Cobb on Monmouth Beach. The R.A.F. unit was closed in 1964. With the boom in boating as a recreation, and Lyme Regis now a thriving holiday resort, the town was yet again without a lifeboat: but after long discussions and hard fundraising June 10th 1967 saw the re-opening of an RNLI lifeboat station in the town and almost 900 call-outs later, is still operating to this day.

There have been many services at Lyme Regis that have been recognised by awards: in total, 1 Gold, 7 Silver and 3 Bronze Medals since 1825. The most prestigious in recent years being in August 1979 when helmsman John Hodder with his crew of three (Paul Wason, Graham Turner and Colin Jones) rescued a party of five persons (including a small boy) from their yacht “White Kitten” in storm force conditions. John Hodder and crewman Colin Jones (who single-handedly sailed the yacht to the safety of the harbour) were each awarded the Bronze Medal and the crew were also presented with the Ralph Glister Award for the most meritorious rescue by an inshore lifeboat that year.

The £135,000 lifeboat now stationed here was funded almost entirely by local donations and came on service on 29th September 1997. She is longer, wider and more powerful successor to the Atlantic 21 being powered by twin 70h.p. engines giving a maximum speed of 34 knots (i.e. 39mph). “Pearl of Dorset” is fitted with a satellite navigation system, VHF radio, righting capability in the event of a capsize, and first aid equipment. The crew is normally three including the helmsman.

The boat is launched from its DO-DO trolley (meaning Drive On, Drive Off). This is manoeuvred by a seven tones semi-submersible tractor enabling speedy launches particularly at low water. The station prides itself on an average launch time from initial page to leaving the harbour of just seven minutes. Each year the lifeboat launches on service and exercise over one hundred times, many of which involve other rescue services including Coastguard auxiliary cliff rescue team and the Coastguard search and rescue helicopter based at Portland.

It is hoped that Lyme Regis will get a new boat in the not too distant future. The current boat is known as an Atlantic 75; the replacement would be an Atlantic 85, which would be bigger with more sophisticated equipment.

Some 36 volunteers help run Lyme Regis lifeboat and the lifeboat station. They range from the Lifeboat Operations Manager, Rob Fossett, to a team of Deputy Launching Authorities, helmsmen, crew and shore helpers and tractor drivers.

Today’s volunteer lifeboatmen here come from all walks of life. Only two of the crew of fourteen are professional seafarers: the rest are made up of such professions as teachers, market gardeners, engineers, builders and chefs. The crew are supported by a similar number of men on the shore acting as mechanics, tractor drivers, radio operators and other invaluable shore helpers. They are all dedicated to the saving of life at sea and can only do so by the continued support of the public.

Mr D. Manners was FORMER secretary of the station.

The RNLI charity saves lives at sea. Its volunteers provide a 24-hour search and rescue service around the UK and Republic of Ireland coasts. The RNLI operates over 230 lifeboat stations in the UK and Ireland and has more than 100 lifeguard units on beaches around the UK.

The RNLI is independent of Coastguard and government and depends on voluntary donations and legacies to maintain its rescue service.

Since the RNLI was formed in 1824 its lifeboat crews and lifeguards have saved over 137,000 lives.

The RNLI is a charity registered in England, Scotland and the Republic of Ireland.