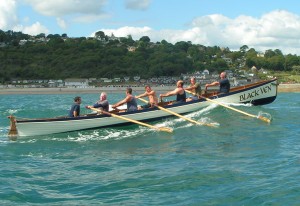 Sunday, August 14th, saw pilot gig clubs from across the South West descending upon Lyme Regis to race against each other at the Lyme Regis Gig Club Regatta.

Lyme’s Ladies Team Captain, Diana Dixon, said today: “We are extremely pleased to have had another wonderful regatta and send our thanks to all the clubs who made the trip to Lyme Regis.  The racing was very exciting in somewhat difficult sea conditions.”

The races took place off of the Cobb Harbour wall starting at 11.30am on a sunny but quite windy Sunday causing a fairly rough sea.

The Lyme Regis Gig Club’s main sponsors are Otter Brewery and Newlands Holiday Park, but the club is indebted to many other members of the community who continue to help make everything possible.