Shot Across the Bows 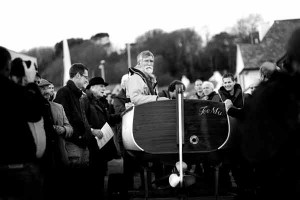 Exeter-based photographer Jenny Steer, whose work has been published in The Times, Daily Express and Daily Mirror among others, is holding an exhibition of the section of her work that features the Boat Building Academy in Lyme Regis, its boats and its people.  Jenny started photographing the Academy’s twice yearly student boat launches in 2010.

Principal of the Academy, Yvonne Green, says ‘Launches are a very important part of the Academy’s calendar, celebrating the end of our ‘long’ 38 week courses and the beginning of students’ new careers as boat builders.  Students’ families and friends, well wishers and the town come down to the Cobb to cheer as each boat, testament to the students’ new skills, goes into the water for the first time.   Launches are very happy occasions, but we are all very conscious that after them people who have worked closely together for nine months go their separate ways.  Jenny originally came to a launch as the friend of one of our Instructors, but when we saw how her photographs captured the beauty of the boats and the spirit of the occasion we asked her to be our ‘official’ launch photographer’.

Jenny’s photographs have illustrated articles on the launches in Yachting World, Classic Boat and Water Craft in addition to other magazines.  The launches are now attended by hundreds of people.

The exhibition features images of the boats and students against the stunning backdrop of Lyme Regis and the sea.  ‘Sailing and boats have been a big part of my own life’ says Jenny, ‘I absolutely love photographing the boat launches at the Boat Building Academy. There are so many interesting and diverse boat designs from quirky to more conventional. The atmosphere is extraordinary and I feel privileged to be involved in such an important and special day.’

To complement the photographs two of the traditional clinker boats Jenny has photographed will be on loan from their owners for the exhibition.  ‘Witch of Weymouth’ is a replica of a 1902 Dorset crab and lobster boat ‘Witch of Worbarrow’ and was exhibited at the National Maritime Museum Cornwall after being launched in December 2010.  ‘Rubee’, a very pretty little pram dinghy planked in sweet chestnut on oak, was launched in December 2012.

The exhibition, ‘Shot Across the Bows’, is at The Malthouse in Lyme Regis, by the Town Mill, and runs from 25 to 30 May, opening from 10 o’clock to 5 o’clock every day.

Contact Rebecca Joseph on 01297 445545 or email office@boatbuildingacademy.com for more information.